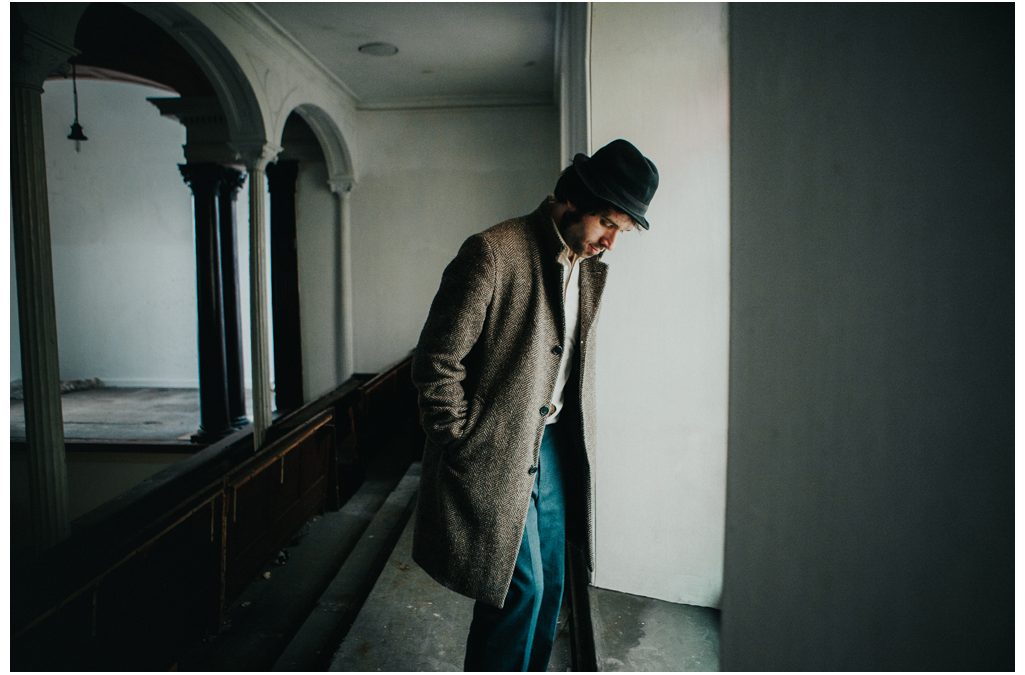 It was about twelve o’clock in the afternoon, mid-October with the sun not shining and a hard frost nipping at the toes of the foothills. A no-nonsense Wednesday. I was wearing brown herringbone slacks, a yellow shirt, brown brogues, black and red chequered socks. I was neat, clean, unshaven and sober, and I didnt care who knew it. I was also knackered, carrying a TV. I’d had a meeting with STA and with the album all ready to go (Andrew Glenn’s artwork was sorted, Tim’s design work for the packaging was complete, a release date set and a launch night booked), it was agreed there was only one thing lacking. A new set of press photos. The last ones had been taken 2 years ago and though brilliant, top brass felt some spanking new ones were in order. Damn it. The thought of posing for more photos caused me no end of consternation. Certain things had changed since 2010. The ravages of time etc etc. I began talking to Lisa Byrne (Miss Wrapped In Plastic herself) about a shoot. We emailed back and forth some images and ideas that we both liked and made plans to get a ween of photos taken in the old Glassworks building – this was Lisa’s idea of course. She’d also secured a jaunt round a warehouse in Pennyburn Industrial Estate belonging to the Playhouse. It would contain all manner of props and costumes. I wanted to get the rest of the guys in the band in on the shoot but this had proved to be impossible what with other commitments, work schedules etc. Lisa and I had been to the props warehouse that morning and found an old Televsion set from (I assume) the 1940’s – the kind of thing you’d watch Ed Wood movies on – and Lo! an astronauts helmet. For some reason, I’d really wanted to get my hands on an astronauts helmet (steady!). I’d even considered buying one off ebay – you can actually buy them – for an arm and a leg and I’d also emailed NASA about the possibility of hiring one. To my stunned surprise they didnt get back to me. I staggered through the Glassworks gates carrying this beast of a TV, gravy running out of me. Once inside, I had no idea what to do as usual. I just hung about nonchalantly munching on a Peanut butter kitkat and left it all down to Lisa. The Glassworks itself had recently just reopened for renovations. A beautiful old Greco Roman building with columns galore, balconies and stained glass. It had been a Presbyterian church, a glassworks and a library. It had lots of lovely natural light and the worst toilet I’ve ever seen. It could have done with a lick of paint – but thats ok, so I could I. I was not exactly a picture of sartorial elegance. My old tramps coat (so called because I won it off a tramp in a fist fight in Thailand. Honest.) draped around my shoulders and my ill fitting trilby (so called because it doesnt fit) wedged on my head like a mattress balanced on a bottle of Buckfast. To Lisa’s credit, her photo’s turned out brilliantly. We didn’t use the Television or the helmet (we had plans for those on another shoot) but as I looked over the shots, I was delighted with the results. Its been my great fortune to work with terrific and sympathetic photographers since I started this songwriting lark. They’ve been patient, diligent and above all, super-creative. Hats off to them! Check out Lisa’s work here –http://www.wrappedinplasticphotography.co.uk