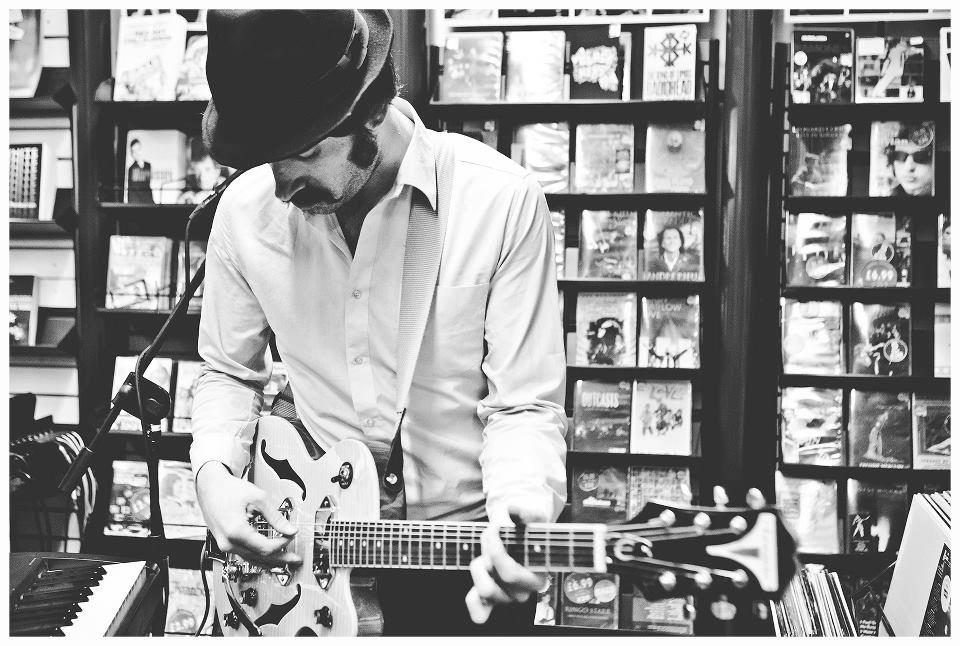 Saturday 20th April 2013. 3 o’clock. I’ve been asked to perform in my local Independent record shop along with a wealth of Derry talent to celebrate ‘Record Store Day’. I’ve only just purchased a new guitar (a lovely Epiphone Wildkat) and i’m keen to give a public spanking to some new songs. Also on the bill are Strength, The Clameens, Sullivan & Gold and Little Bear. I’m due on at 4 o’clock and I swear at everybody I see as I drive around the city looking for a parking space. ’Bastard!’ I snarl as a hapless driver steals a spot I’d my eye on. I squeeze the motor into the last space in a car park and run like hell to Cool Discs. Juggling a keyboard, an amplifier and a guitar ain’t easy and as I peer in the heavily postered shop window, I wonder how the deuce I’ll fit my moustache in the door let alone an amp. The place is packed. Its heartening to see such a healthy throng there. Cool Discs is, in fact, the only record shop left in town – HMV having recently closed its doors. It is the only Independent store in the Northwest and (like other examples around the world) is an important symbol of a vanishing ethos. The film ‘High Fidelity’; The store as a community of like minded dropouts. The transformative and unifying power of rock agus roll. The black and white footage of teenagers huddled in a group, listening to the latest Little Richard record through oversized bakelite headphones, their heads bopping, their eyes bowed, their feet tapping out some primal, sexual dialogue. Friendships are forged in record stores. Love affairs are sown one day, sundered the next. Bands are formed by introverts and extroverts alike. It may be cheaper to purchase a work via some faceless megaconglomercorporation but isn’t it nicer to hand over your ill-gotten gains to a human being all the while, picking his brains about what he thinks of the new Kurt Vile album? In its sixth year, RSD aims to highlight this ethos, celebrating at once the medium of vinyl and giving established and amateur outfits an outlet in which to flog their shit and sing for their supper. Which is where I come in. Sullivan & Gold are playing. Their melliflous harmonies weave in and out of the P.A. speakers rigged outside the shop. ‘Christ, they sound good’, think I. I’ve asked the two of them (real names; Ben & Adam) to sing harmony on two tracks. A waltzing ballad called ‘Fool For Love’ and a sparse version of one of the B-Sides on our upcoming ‘Gargantuan’ single, entitled ‘How Long Must I Dream’. All the acts are to perform a 15min set and I approach mine with my usual jangling nerves. Ben & Adam sound gorgeous ducking and swooping over my vocal and I reflect how nice it is to sing in proper harmony with people. I make a mental note to start a barbershop quartet, or if not, to at least visit a barbershop and get a haircut. My set over, I hang about outside chasing my 3 year old in and out of Doherty’s Bakery whilst Little Bear very gently prise the roof from its moorings, bringing the session to a close. In a little while, whilst nursing a beer and listening to more great live music in Sandino’s, It will occur to me that my parking ticket expired over 2 hours ago and as I race to the car, sweating and cursing, I think about RSD and the records I might have bought with the fucking 30 quid parking charge I was sure to have acquired.