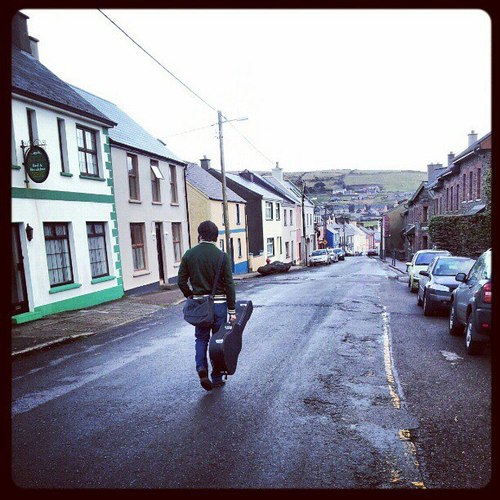 Early November 2012. It is 9:46 on a Wednesday evening. I am barrelling up the Northland Road having just finished work. It is a dank, dark shitty night and I can’t wait to get home. My phone rings. Its Celtronic boss and City Of Culture booking officer Gareth Stewart. The call can mean only one thing; a wee gig? I pull in on Clarendon Street and answer. Stewarty speaks with his usual customary haste and my suspicions are quickly affirmed. I’ve been invited to play at ‘Other Voices’ in Dingle, Kerry on the last weekend of November. The news staggers me. Only two acts from the north are to make the 8 hour trek there. Myself and 16 year old wunderkind SOAK. The only problem is I have flights booked to Amsterdam that same weekend. Fuck. In my excitement I almost plough into the car in front as I indicate to take off. Cut to Friday November 30th. I have persuaded Miss Janie Doherty to accompany me to Dingle and we are lost somewhere outside Galway. Its about 11 in the morning and I need to be there for 14:30. I seem to have taken a wrong turn at Albuquerque and the Griswold family truckster insists on driving towards Dublin. I go around the same roundabout thrice (Look kids! Big ben! Parliament!) and I am frankly shitting myself. After what seems like endless hours on the road, we eventually get going in the right direction. We pass through Limerick and Tralee and its lovely to see these parts of the country for the first time. As we hit the winding mountain route down into Dingle, Janie assures me we are in the wettest county in Ireland and that its also the ‘greenest’. It is lashing down and extraordinarily green. Like the bold, unnatural looking technicolour greens in the film Apocalypse Now. And like Martin Sheen searching for that mad stab Colonel Kurtz, I’m panicked, lost and slightly delirious. Dingle itself is everything I expected it to be and more. Picturesque and friendly, it is the archetypal tiny Irish coastal village.

We park on a disabled space and race down the street to meet Triona, our contact for the weekend. It turns out I will be filmed shortly performing ‘Catalonian Love Song’ on piano for inclusion in the TV programme as part of the ‘Other Room’ section of the show. She’s lined me up with a gig on Saturday too on the music trail in a little bar called Dick Macks. We have been provided with accommodation for two nights and food vouchers. So far so splendid. We get settled in and I perform the track on cue in McCarthy’s bar. It all goes swimmingly and I’m delighted. St James church has been the scene of the main part of Other Voices for 11 odd years. Its 200 years old but in truth, looks a lot older. Its disarmingly pretty – even to an old heathen like me – and we watch as the crew decorate its hallowed, crumbling walls. After a terrific meal across the road in The Goat Street Cafe, Janie and I spend the rest of the evening flitting happily from pub to pub. There is one joint in Dingle called Foxy Johns which has to be seen to believed. Its a tiny saloon half of which sells liquor, the other half is a hardware store selling screws, hinges, old fuses, corn plasters, hairdryers, tools, car air fresheners – all sorts of shit. I ask politely for two pints of Guinness and a box of masonry nails. We get to chatting to some friendly locals and blag our way into a late gig in McCarthy’s. McCarthy’s has the appearance of a converted shed and is utterly charming. We get drunk and make merry with the Derry contingent till the wee hours before we’re swiftly booted out. The night air hits me up the teeth and I feel like Oliver Reed. ‘Come on back to a party.. Its only up the street’ offers a disembodied voice. We decline with thanks for various reasons. Chief among them being that I can barely see and Janie can scarcely walk. The next afternoon, delicate and subdued we head for Dick Mack’s where I’m due to play. We squeeze inside the door and its absolutely jammed. Punters are queued out onto the street. Smaller than Foxy Johns, its an amazing spot that seems at one time to have been a shoe shop. Shoes boxes and antique boots of various styles are on shelves all around the walls. You couldn’t roll a brandy ball in your mouth in the place. I should know; I spent a good 10 minutes trying. There’s a young girl on before me. She sings like a bird, goes down like a storm and I am terrified. The place seems to pack up even more and i’m practically sitting on people’s knee’s to play. I sweat out a half hour set and the crowd are resolutely silent the entire time only to erupt in applause between each song.

You could literally hear a pin drop. Its the best solo gig I’ve ever done and I climb over the top of everybody triumphantly to get to Janie who’s stuck in a corner clutching a pint of Guinness with my name all over it. She’s a good kid, yes she is. Gig over, we go for food in Geany’s pub. We are led to an empty pair of seats. We sit. I order fish and chips – ‘the freshest in all of Dingle’ according to the menu – and the waitress explains the fish is ‘Hake’ and was just caught that morning. I’ve never heard of Hake but she has an honest face and I take her word for it. The food arrives at our table. It looks terrific and tastes even better. It is inarguably the best fish and chips I have ever tasted. It could make a priest kick a hole in a stained glass window.

Later that night Janie and I attend the live screening in the hotel across the street from the church. Frocked and suited, we watch The Strypes, Owen Pallett, The Villagers and pretend we are different people. She pretends to be a bass player in some band whilst I insist that I’m a wealthy wind farm developer here in Dingle to set up a few wind turbines. Hoho. This tomfoolery persists and we drink some more, mingling with the Dingle hoi polloi till we’re swiftly booted out. The night air hits me up the teeth and I feel like Keith Moon. Sunday morning, we thank Triona for all her help and say Slan to Other Voices. We ride out of Dingle at approx 14:30 in the afternoon. We hit Derry at 10:45 at night and head straight for Mamma Mia’s Italian takeaway on William Street. We order food and talk crap with the proprietor, Paolo as he ladles chips fried in goose fat into a brown paper bag. As for Amsterdam, I had to cancel the flights but would return there in January to traipse about in the snow, foundered and wearing three pairs of socks.