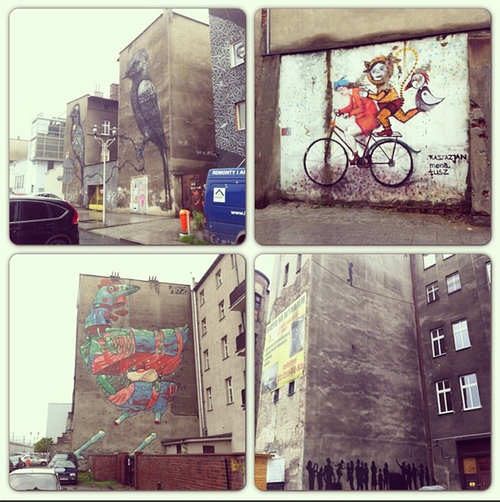 The plane bounced off the Krakow airport runway before landing again and grinded to a definite halt. I pulled my heart out of my mouth and glanced at Ben who grinned cheerfully. The pilot, it seems, had attempted to land two or three times before circling around again and giving it another slap. Ryanair’s beyond irritating trumpet fanfare tooted around my ears and announced that I’d been party to ‘yet another Ryanair flight arriving behind schedule yadda fucking yadda.’ I guess thats what happens when a shoddy airline brusquely shoehorns its passengers in on top of each other and takes off before they’re supposed to. I peered through the window into an endless sea of wet fog. I was alive, in Poland, and apparently, early. A year ago I’d been invited by a chap called Krzysztof Ferdyn to come to Poland to play a music festival called ‘Festiwal Rock Stars’. Sullivan & Gold (Smalltown America label mates) had also been invited but neither troupe had been able to make the journey. This time around Krzysztof contacted Ben and the two of us agreed to head over and perform an OKS set and an S&G set, playing and singing on each others tracks. We were to play at a club called ‘Old Timer’s Garage’ in Katowice and had been put up in a lovely new 4 star hotel called ‘Arsenal Palace’. We met up with a young lady called Agnes at the airport – our extremely helpful chaperone of sorts for the weekend ahead – and she drove us swiftly to Katowice. On the way, she taught us a few words of Polish – the only one I now remember is ‘Kurwa!’ (pronounces ‘Coodva’) which means ‘fuck’, the words for hello and goodbye having presumably dropped from my brain into the Baltic sea during the flight back – and gave us a sightseeing drive around gloomy rain sodden Katowice, pointing out the salient points of interest before depositing two unruly Irishmen at the Arsenal Palace. It was about 12 midnight. We did the receptionists head in for a couple bottles of Tyskie and retired. Rock i Roll. The following morning, after a random assortment of weird eggs and sausages for breakfast, Agnes appeared again and took us through Katowice (weather = rainy and glum) to meet Krzysztof at the Old Timer’s Garage. En route, Ben took a few shots of some terrific street art.

The venue itself was fabulous; an americanised club with old cars and machinery from the forties and fifties built into the walls, replete with a huge beer garden and a proper venue with a huge stage, tiered seating and a balcony. Kurwa! It turns out we’d been summoned to not only perform, but also to be ‘judges’ of a live competition. A festival honouring the memory of (apparently) one of Poland’s finest songwriter’s Jacek Skubikowska. All the acts would perform songs from his back catalogue and the winner would recieve a 50 inch TV. Ben and I sat through each of the songs – all in Polish – becoming progressively more confused and drunk. We were unsure what we could bring to the table quite frankly and gentleman Krzysztof had transmogrified into a gaiety giving alcohol pez dispenser firing Tyskie’s and vodka’s at us with one hand and a slap on the back with the other. An amazing fellow. Once the acts had finished, we were called to sit with the other (Polish) judges on the balcony and give our opinions. Which was hilarious and surreal. Lots of thumbs up and nods and winks. The words ‘Lethal’, ‘Belter’ and ‘Shitemare’ seemingly unfamiliar to our new judiciary friends, certainly in the context that I was trying to use them. But in the end, I think, we all agreed that the right act had won. Ben and I stumbled off to quickly practice a few numbers before our set. Ben had chosen a couple of covers and we’d worked on piano and electric guitar versions of our own material, replete with two part harmonies.We approached the stage to generous applause and good natured bonhomie. And the gig went great. Ben talked at length to the audience about this and that and I, by this stage, quite inebriated, certain that nothing breaks down a language barrier more than a swear word, just roared ‘Kurwa!’ every so often into the mic to appreciative laughter. We were told afterwards we’d made a gentleman in the audience cry – which was a first.

Gig over, we lay back to be pummelled about the head (in a really good way) by the sounds of Mech – one of Polands original Metal bands. The sound was terrific – think Black Sabbath only, ironically, less intelligible – the light show and dry ice straight out of This Is Spinal Tap! and everybody had an absolute ball. Maciej Januszko (the bands singer and known locally as ‘The Polish Ozzy’) prowled about the stage like a snarling black sequined tiger, tossing Polish jokes over the heads of Ben and I and with a voice and energy defying his 60 odd years on planet rock. After the show, everyone retired to a back room, where we feasted on sausages that had been set on fire – which actually were delicious even after eating about 30 of them – and more and more and more and more vodka. A more generous bunch of people I’ve never met. I hope to imbibe with them again someday. At about 3 in the morning, Ben and I stumbled blindly back to a different and very nice hotel for the night – the name of which escapes me. The next morning, after another random assortment of weird eggs and sausages for breakfast, Krzysztof invited us back to his home where his lovely wife made us a delicious meal – not a sausage in sight! – before we were escorted to the airport, put on the plane, and flown by a pilot or two, home. We were alive, in Derry, and apparently, early. Terrific.

The only blight on my otherwise glorious Silesian landscape was getting robbed to within an inch of my 34 years by a woman in a souvenir shop at Krakow airport. In a rush to make the plane, I had stopped to buy some Polish looking toys for my demanding 4 year old daughter. I was charged 40 euro (around 170 Zloty) for the abject objects displayed below. I shit you not. Upon reciept of the motley playthings, Saffron (as I like to call her) looked me square in the eye and sighed, before running off to play with some sellotape and a ball of twine.