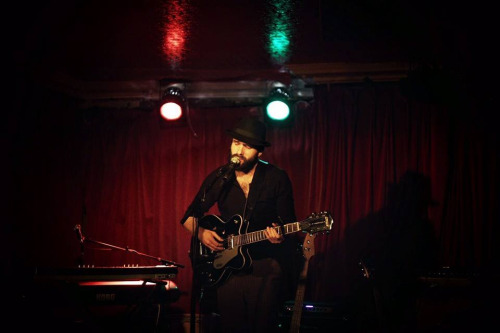 Middletown. That’s where we’d ended up. Middletown. We were on our way to Dublin, Lisa and I, to rendezvous with the lads from PORTS. I’d been asked to support them on two gigs of their Irish tour. The first of which – Whelan’s in Dublin – was mere hours away. Yet here we were, on a Friday, in the midst of empty Middletown. Twinned with nowhere. Population 237 middletonians. Every single one of which appeared to be cloistered away, pawing at rudimentary Ouija boards I imagined, or playing one huge game of musical chairs in crippling silence, bumping into each other and slipping about a parquet floor wet with tears. Or maybe they just stayed in cos the weather was shite. Either way, I was becoming increasingly vexed at my own inability to follow simple directions. I swore again at the sat nav.

Approximately 54 hours later, we’re knocking back drinks at a disco after the gig in Monroe’s bar, Galway. A man who looks *exactly* like mob boss Jimmy Serrano from Midnight Runis throwing shapes that would make Isadora Duncan wince. And in the same silvery polyester slacks that Jimmy wore as he threatened to bury his telephone in the head of an ineffectual lackey. The place is leaping. The gig in Galway had been good despite a small audience. Though it was a quiet Sunday night, PORTS performed with the ease and professionalism that has become their trademark, charismatically addressing what little crowd there was and gently but gently prising the roof from its rafters. I performed a suite of my own songs on both keys and a heavily reverbed Gretsch. I threw in a cover of Roy Orbision’s ‘Falling’ for good measure. Lisa and I had booked ourselves a room at a hotel called Victoria and stayed out half the night before wandering round town, drunk and happy, staring bleary eyed at the distant outline of an eclipsed moon. I took some hopeless blurred photographs for posterity.

After Middletown, we’d gotten back on the right track and made it to Whelan’s. The entire journey had only taken 5 hours. It was *almost* as if I’d never driven to Dublin before. Which I have. I swear. We’d have been quicker walking. We inhaled some grub in Eddie Rockets and embraced the lads from PORTS before a swift linecheck ensured I was ready to take the stage. This time, the gig was an altogether different machine. The bar was rammed, the sound was magnificent and the gig went down a treat. Lisa took some terrific photos. Lud one of them.

I crept offstage to allow PORTS to get ready. I’ve been in attendance at a few of this bands gigs where something wonderful always tends to take shape, where the band becomes something more than just four lads onstage. Its as if there’s a feeling in the crowd of a shared realisation that they’re part of an event. This night was no exception. The songs swooped and swooned, the noise coalesced and the band slowly morphed into a quadra headed honey-monster dispatching nectar from its gills, whispering sweet nothings to itself and a room full of stunned revellers. Lisa and I hung around awhile then set off for home – but not before I almost knocked a lady’s teeth out with my guitar case. “Ah jaysis!” said she. “Sorry,” said I.

Now. Given the fact that I’d used a sat nav to plan the quickest route to Dublin and become hopelessly lost, you could be forgiven for assuming I’d make damn sure the journey back would be swift and exact. Well, not quite. I set off in completely the wrong direction and the drive back became a slog, enlivened only by the presence of the girl in the passenger seat beside me. I thought about Jimmy Serrano and his silvery slacks sashaying his way through the streets of Middletown, twinned with nowhere, its 237 residents peering through vertical blinds wondering what on earth a fictional mob boss was doing in Armagh.