I CAN’T BELIEVE IT’S NOT BUTLINS 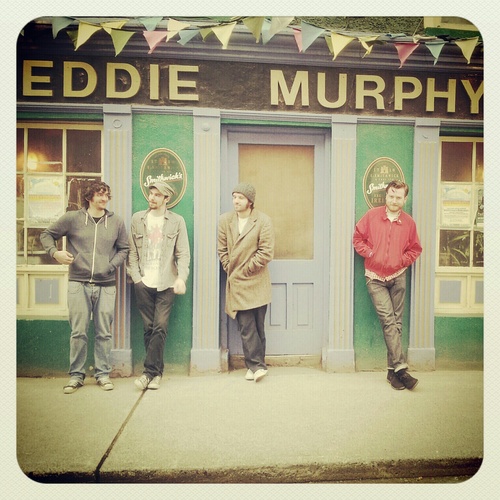 A fairground in Thomastown, Kilkenny. Summer, 2012. Teenagers looked on in detached amusement as 5 drunken musicians were thrown left right and centre on a fairground ride. Wallets were tossed in the air, fillings shaken loose and dignity took the rest of the evening off. One of the musicians (the singer) appeared to be freaking out whilst the other musicians laughed like gurgling drains. The evening air turned blue. There were threats, shaking of fists and gnashing of teeth. Later, there would be rumours of a 5min video of the whole sordid affair. Deals would be brokered behind heavy closed doors to ensure the alleged video would never see the light of day. Our reasons for being in this delightful fairground were threefold. A. We’d been invited to perform at the Happy Valley Festival in Thomastown, Kilkenny. B. We’d already played our set and were determined to see the sights, tearing up sleepy Thomastown like vikings on shore leave. 3. We were drunk. The day had been an eventful one. After a gruelling 5 odd hour drive we reported to the festival hq for instructions. Thomastown itself (it was the first time any of us had been there) was beautiful. An archetypal Irish hamlet with a beautiful swan filled river running right through the centre of the town; the banks of which doubled as a camping area of sorts during the annual festival. We would be playing in a lovely little pub called, simply, ‘Eddie Murphy’. Get the fuck outta here! Nope, really.

We’d be getting our dinner and some money and it would all be splendid. We’d brought a couple tents along and I’d brought a bootload of purple ‘Plutonium’ 7″ singles (It had just been released) to flog to anyone within punching distance. The gig was swift – as these things always are – and we were given our allotment of free beer (Cobra, I believe) and food tickets. As the day passed we heard some good acts, ate some lovely home made food and drank more and more beer. Eventually we spilled out onto the streets wondering what else Thomastown had to offer. Which brings us to the hairy scenario detailed in the opening paragraph of this spiel. What better way for three 30 somethings, one 20 something and one 40 something to pass a drunken evening than at a kids fairground? What better craic can be had than firing nickel pellets through tiny pieces of card in an effort to win a garish neon pink stetson? And who knew Ciaran would possess the deadly aim of a sniper?

Fun at the fair had and relations within the band ambiguous at best, we repaired to another old pub for awhile then made our way to the old limestone bridge where the after party purported to be. There we found all sorts of lovely revellers, a DJ, fire breathers and musicians from the acts all wandering about. It was around 4 in the morning. At this stage, I thought of only two things; The 5 hour journey home in the morning and my tent, snug as it was in the boot of my car beneath a brace of unsold purple 7 “ singles. Bidding farewell to nobody, I made good my escape along the riverbank, dodging wisps of fire and thinking what a good nights sleep I’d yet have. As it would turn out, I, in a moment of charity, would offer my palatial 2 man tent to Rob and Aaron preferring to sleep almost upright in the front seat of my car. A terrible idea. They would regale me with tales of an enchanting deep sleep amid dreams filled with swans as I drove home with a stiff neck and mild pneumonia.